KrokApp is an IT-platform that allows user to hear interesting facts, practical information and useful hints while he moves around the location. KrokApp transforms the country into a big “smart home” – understandable, dynamic and modern.

Currently you can listen information about more than 50 cities of Belarus via the KrokApp mobile program. Content is available in three languages – Belarusian, English and Russian. A prototype for Czech and Chinese languages has already been developed. Content providers actively add content to the common BigData server krokapp.com, which instantly provides access to electronic data to all users.

The KrokApp IT-platform is open for improvement and development by programmers, as well as for replenishing useful data from historians, professional guides, tourist centers, regional specialists in local history, museums and amateurs.

Tourist Jan makes a transfer in Minsk from a train to an airplane; he has 10–20 hours of free time. KrokApp offers him a certain number of points to visit regarding a certain number of free hours. In addition, if Jan expresses a desire to have a meal and buy something, KrokApp will correct the route accordingly.

There are 110 cities in Belarus. The number of cities with which it is possible to get acquainted via mobile programs (not audio guides) located in the Google Play mobile program store: up to 20. There are less than 10 mobile programs with audio content about big cities of Belarus. There is no single program that would collect and conveniently present historical and cultural information about the cities of Belarus. It should also be noted that there are more than 27,000 settlements in Belarus about which it is possible to tell via modern means to a wider audience – to foreign tourists, residents of cities and residents of the settlements themselves.

According to the results of a survey of casual passers, only 1 respondent out of 20 was able to name the landmarks located not in one city, but in at least 5 different settlements. 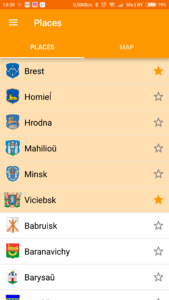 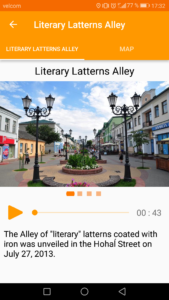 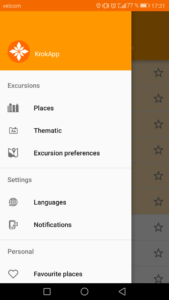 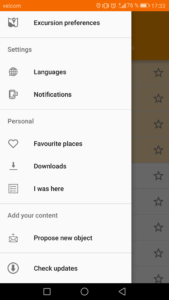 for new points and comments: ssrlab221@gmail.com.