The «Alphabetical Subject Index Generator» service makes it possible to convert the text of universal decimal classification tables (UDC) into an alphanumeric subject index (ASI). The UDC tables in the format “class code – class description” through a tab are sent to the service as an input, one class per line. The result of the service work is a fragment of ASI.

Alphabetical subject index (ASI) — the index that is made up from a set of alphabetically ordered words, wordgroups and phrases of the natural language, denoting objects of any branch of science or practical activity [1].

ASI for UDC — the array of matches «terminological unit – coordination code/index» Each match is a separate subject heading [2].

Universal Decimal Classification (UDC) is an international classification system that meets the most essential requirements for classifications: internationality, universality, and extensibility. UDC tables have been translated and published in whole or in part in more than 40 languages, and UDC is used in approximately 130 countries of the world. UDC has been operating in Belarus for the past 50 years. However, only in 2016 the official publication of the UDC in Belarusian appeared. The alphabetical subject index (ASI), which makes up more than a quarter of the publication, was prepared using an algorithm that automated the process of its creation [2].

Using this service, ASI for the publication «Universal Decimal Classification» was generated [3].

The algorithm makes it possible to form the ASI of UDC based on the texts of its tables and is focused on working with the Belarusian edition of UDC, but the separation of the linguistic and thematic resources used in the algorithm from the algorithm itself allows to adapt it to work with UDC in other languages.

Step 1. Loading resources. The Fsc, Fsw, Fdic, Fdom  files with special resources are loaded into the computer’s memory, the corresponding lists are formed.

Step 2. Formation of the list of UDC classes. The TUDC  input text is divided into separate records – UDC classes, in each notation the class code and the class description are distinguished. Thus, based on the TUDC input text, the list LUDC = <Cl1, … , ClN>,  is formed, where Cln = <Notn, Capn>, Notn  is the nth code of the class, Capn  is the nth class description, n = 1, …, N.

Step 3. Processing the list of UDC classes. A Lres list of correspondences «word – a set of class codes» is created, in which the processing results will be entered. Each Cln element of the LUDC list goes through steps 3.1–3.6.

Step 3.2 Words distinguishing. In the description of the Capn class, all character sequences matching the pattern structure of the word Ptw are distinguished. Using the PCRE regular expression syntax (https://www.pcre.org/original/doc/html/pcrepattern.html), this template can be represented as follows:

The words distinguished in the description of the class Capn are entered in the list Wcap = <wrd1, … , wrdM>, where wrdm  is the mth distinguished word, m = 1, …, M.

Step 3.3 Normalization of words. Each word wrdm from the Wcap  list is reduced to a normalized electronic form (words are reduced to lower case; the apostrophes are unified, the letter «ў» is replaced with «y» at the beginning of the word, etc.). The result of this processing is a list of normalized words  W’cap = <wrd’1, … , wrd’M>, where wrd’m  is the mth normalized word, m = 1, …, M.

Step 3.4 Filter by stop word list. For each word from the W’cap list, a determination whether it belongs to the Lsw stop word list is made. If no belonging is identified, then the word is entered in the list W”cap = <wrd”1, … , wrd”K>, where wrd’k is the kth valid word, k = 1, …, K.

Step 4. Domains assigning. The elements of the Lres list are enumerated. In each element of Lres, for each class code, the thematic domain dom is determined by the Ldom list. Codes of classes whose domains coincide are grouped into one array.

Step 5. Formation of the result. The final list Lres is sorted by the Belarusian alphabet and converted to a text format with the necessary formatting. The TASI  result is displayed on the screen and saved in the corresponding file on the server.

As a result of the execution of the described algorithm on the basis of the UDC tables in Belarusian language, the ASI is formed. It is worth noting that the proposed algorithm is suitable for expansion to other languages, since the linguistic and thematic resources used in it are separated from the algorithm and can be developed for another language.

The service interface is shown in Figure 1.

The interface contains the following areas:

User work with the service scenario

For the correct work of web service, the UDC tables should be presented in the following format: UDC classes are separated from each other by a line feed, in borders of one notation the class code is separated from the class description by tab (Figure 1). 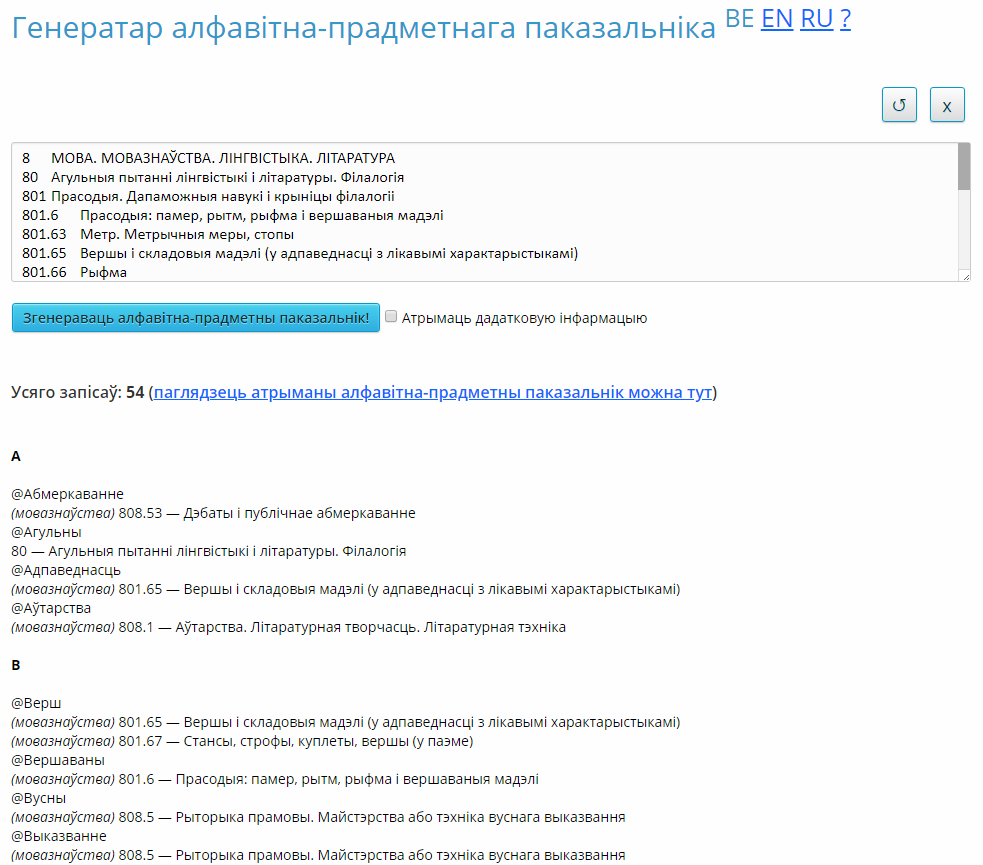 The service enables the user not only to generate the ASI based on the entered text, but also to track certain additional information regarding the processing (for this, the «Get additional information» item should be marked). The service will provide information about words that could not be processed due to the lack of any necessary information in the database, as well as provide a list of amographs found in the input text. The table shows an example of the final ASI generated on the basis of a fragment of the UDC tables using the web service «Alphabetical Index Subject Generator». 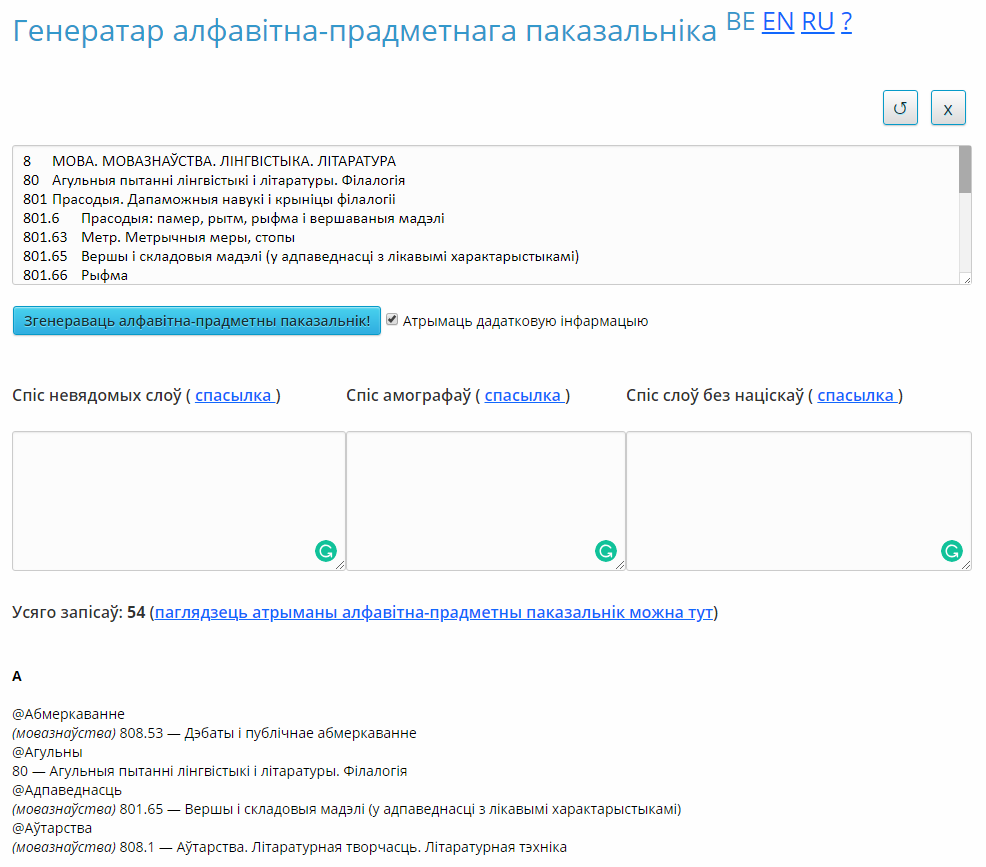 To access the «Alphabetical Subject Index Generator» service via the API, you must send an AJAX request of the POST type to the address https://corpus.by/AlphabeticalSubjectIndexGenerator/api.php. The following parameters are passed through the data array:

The server will return a JSON array with the following parameters:

For example, using the above AJAX request, the following response will be generated:

Page of the service: https://corpus.by/AlphabeticalSubjectIndexGenerator/?lang=en