The «Voice Activity Detector» service allows user to receive a detailed analysis of the audio recording spectrogram to identify periods of voice activity and the intervals between them. It is possible to obtain results (a list of periods of voice activity or pauses with an indication of time with an accuracy of 10 milliseconds) in the form of subtitles or tags for the Audacity program. Using a special button, the user can pack the processing results into an SRT file and download it. The service works only with audio recordings in WAV format. The voice activity recognition algorithm used by the service is implemented in Python with the active use of the freely distributed libraries NumPy and SciPy capabilities. In its initial form, the algorithm is fast, accurate, reliable, and undemanding to system resources, but at the same time it is noise-resistant (the last property practically does not depend on the nature of the noise), what has been demonstrated by special comparative examinations (see the section «Source references»). An improvement of the algorithm made by the Speech Synthesis and Recognition Laboratory is the preliminary removal of noises.

Noise – a combination of non-periodic sounds of various intensities and frequencies, random fluctuations of various physical nature, characterized by the complexity of the temporal and spectral structure.

NumPy – the open source library for the Python programming language. The capabilities of this library include support for multidimensional arrays (including matrices), as well as various high-level mathematical functions designed to work with such arrays.

SciPy – the open source library for the Python programming language, designed to perform scientific and engineering calculations. The most popular features of this library in the «Voice Activity Detector» service are the functions designed for signal processing.

WAV-format (Waveform Audio File Format) – a format of container file for storing recordings of digitized audio stream, a subset of RIFF (Resource Interchange File Format). This format is traditionally associated with the Windows operating system (although it is also common in the Linux OS family) and is most often used to preserve the original appearance of high-quality audio files.

SRT file – a text file containing subtitles that are used by various audio and video playback programs. The text information that is stored in the .srt file can be modified by any text editor.

Voice activity detection (VAD) is a critical problem in many audio stream analysis systems, including speech coding, speech recognition, speech optimization, and audio indexing systems. A well-developed VAD algorithm significantly improves the quality of such systems in terms of accuracy and processing speed (including processing voice messages in noisy environments).

VAD allows to save resources during data transmission by the communication channel, because the interruption in speech is not digitized and not encoded, and thus «empty» packets with silence are not transmitted over the network. This is very important for packet transmission (which, for example, is transmission in TCP/IP networks), because, in addition to the data itself, each protocol of all levels of the OSI model (transport, network, etc.) appends its own service information to each packet with data; as a result of this, the packet size grows significantly. Skipping of «empty» packets with small noises is an easy way to save traffic and, as a result, increase the channel capacity. For this reason, the VAD mechanism is often used, along with various effective compression codecs, in IP-telephony.

A special case of using the results of audio recordings processing packaged by the service in the SRT format can be facilitating of the work of creating subtitles for audio and video files.

It is also important that most of the current VAD algorithms show good results when working with a «clean» audio stream, but in the case of noisiness, they lose their effectiveness. The algorithm on which the service is based is characterized by high noise resistance. This algorithm is presented by M.H. Moattar and M.M. Homayounpour in the work «A simple but efficient real-time voice activity detection algorithm» (17th European Signal Processing Conference, 2009) and it is a step forward in compare with existing solutions. Active use of the service will make it possible to popularize this algorithm, as well as collect factual data for its further improvement (in particular, refinement of input constants).

The algorithm described in the above work of M.H. Moattar and M.M. Homayounpour, implemented in the service using the tools of the Python language, but it is not presented only in its «pristine» form. An employee of the Laboratory for Speech Synthesis and Recognition Kalabuk D.S. made additions to the algorithm – in particular, preliminary noise removal was added, and some mathematical improvements were introduced to ensure faster and more accurate operation.

The beginning of the algorithm.

Step 1.2. Dividing the array into frames according to the value of FRAME_LENGTH_MS. No frame overlap is allowed. Counting the total number of frames (Num_Of_Frames).

Step 3.2.1. Finding the dominant frequency component of the speech spectrum (F (i)) by the formula F (i) = argkmax (S(k)), where S(k) is the frame frequency corresponding to the maximum spectral value.

Step 3.2.2. Calculation of the abstract value of the spectral flatness measure, SFM(i), according to the formula SFMdb = 10log10(Gm/Am), where Am and Gm are the arithmetic mean and geometric mean of the speech spectrum respectively.

Step 3.5. Initialization of the variable Counter = 0. Checking the following conditions:

Step 3.6. If Counter > 1, mark the current frame as speech (true), otherwise mark it as silence (false).

Step 3.7. If the current frame is marked as silence, update the minimum frame energy value (Min_E) using the following formula:

where SilenceCount is the current number of frames marked as silence.

Step 5.1. If the user requested pauses detection, invert the sequence of sounding speech and pauses (technically, replace true with false and vice versa).

Step 5.2. Generate user output according to the Format value.

Step 6. Present the user the processing results in the subtitle format SRT.

The end of the algorithm

The user interface has two areas: the data input area and the output area. The appearance of the interface is shown in Figure 1.

The appearance of the «Examples» area is shown in Figure 2. 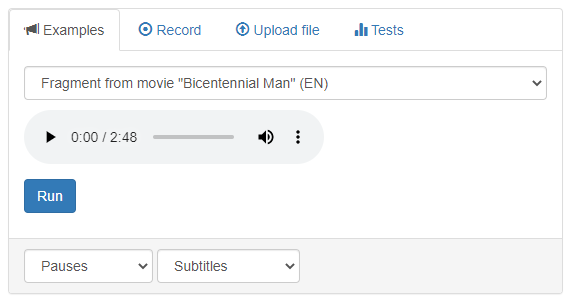 The appearance of the «Record» area is shown in Figure 3. 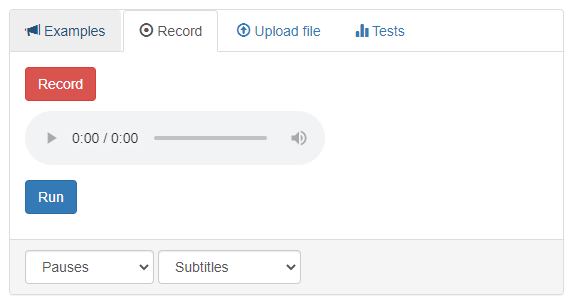 The appearance of the «Upload file» area is shown in Figure 4.

The «Tests» area is intended for visual presentation to the user of data about the quality of the algorithm. The appearance of the area is shown in Figure 5.

The area interface contains a line diagram that displays the values of F-measures to illustrate the quality of analysis of:

To get the most accurate data, it is necessary to move the mouse cursor on the desired line of the diagram.

The appearance of the output area is shown in Figure 6. 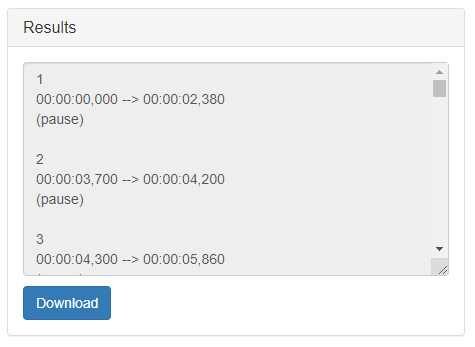 User scenarios of work with the service

The possible result of the service work according to scenarios 1–3 is shown in Figure 7. 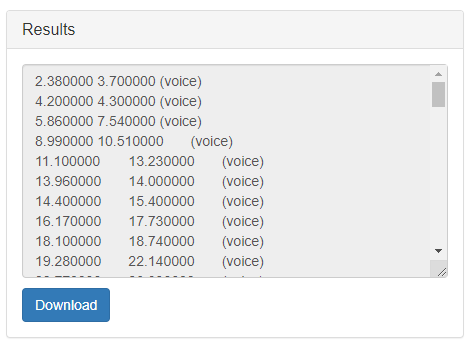 Figure 7 – The result of the service «Voice Activity Detector» work

Scenario 4. Obtaining information about the quality of the service work.

Access via the API is not provided for this service.