Home › We in Mass Media › The Yakub Kolas and Yanka Kupala Institute of Language and Literature. “Speak, so that I will see you” 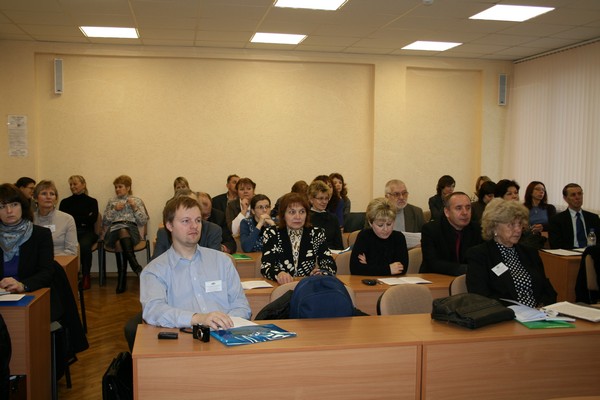 Within the last decade in domestic linguistics a special attention was paid to the problems connected with functioning of an oral form of the Belarusian literary language. At numerous conferences and in a rank of scientific, popular and publicistic editions the questions of modern phonetic processes, dynamics of orthoepic norms, the standards of speech, etc. are constantly being raised. An obvious need in generalizations of scientists’ properties and definition of the directions and prospects of further researches has appeared. The Ya. Kolas and Y. Kupala Institute of Language and Literature  NAS of Belarus  perfectly pulled off, having held  the International scientific conference “The phonetic program of the word in functional-stylistic and experimental aspects: current state and prospects” at the end of November.

The forum topic aroused the interest not only of linguists and university professors, schoolteachers, but specialists in related disciplines – researchers of technical sciences, forensic experts. It should be noted that in recent years the issues of phonetics and orthoepy were commonly included in the program of scientific events dedicated to the study of other language system levels – lexical, grammatical, and others. Holding the conference only in phonetic direction is a landmark event in the scientific life of the Belarusians, Russians and Ukrainians. The scientists from these countries willingly accepted the invitation and arrived in Belarus to share the experience of their own theoretical and experimental studies.

The plenary session opened A.I. Lakotka, the Director of Research Center of the Belarusian culture, language and literature NAS with the welcome speech. He stressed that the correct pronunciation of the literary pronunciation, on the one hand, shows the audience an organic attraction to native word, on the other – provides its unity to all speakers, and preserves the uniqueness common intelligibility of transmitted information. Therefore, at the present stage the problem of orthoepic codification  has particular importance. And, of course, we cannot do without special studies and discussions for  the available phonetic variants of the most controversial positions. Some of these positions, which are connected with the correct speech reflection  in writing,  the first deputy director of the Research Center A.A. Lukašaniecin showed in his report. Aliaksandr Aliaksandravič drew attention to cases that demonstrate the close relationship of orthographic and orthoepic codification: the pronunciation and the display in writing hardness / softness features of the letter [l]   in borrowed words, spelling and pronunciation of the combination “hard / soft consonant + [e]” in a foreign language vocabulary (fitnies or fitnes, mieniedžar or menedžar, etc.), the features of  spelling and transmission such Belarusian phenomena as “dziekannie” and “ciekannie” in native and borrowed words, and others. 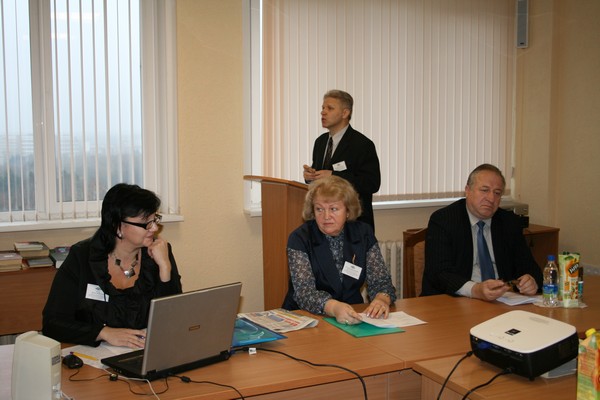 Welcome address of the Deputy Director of the A.A. Lukašaniec

The head of the Department of contemporary Belarusian language V.P. Rusak outlined the purpose of such a large-scale scientific forum precisely and correctly, “The purpose of our meeting is not only to discuss the outcome of the phoneticians, proper commemoration of the founders of the Belarusian phonetic school, but formulation of practical issues for further work on a word: alive, voiced, passed and perceived. To put new questions in the field of phonetic research means to give impetus to challenging developments necessary for conforming the educational process.” 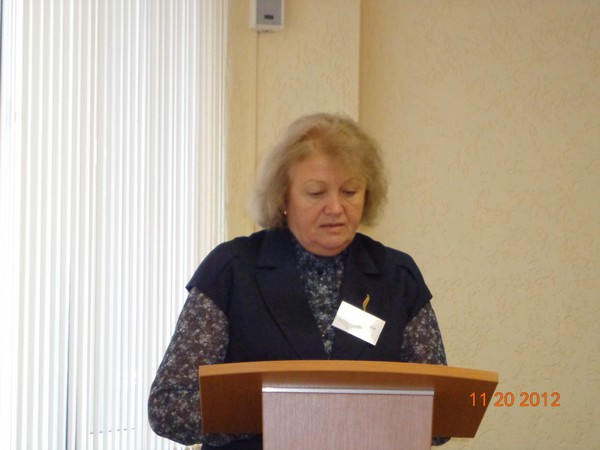 Thematic variety of presentations at the plenary session describes the width and diversity of modern phonetic research. Reports of the main researcher of the Department of Slavic Linguistics Institute of Slavic Studies L.E. Kalnyń and his fellow of the Institute of Ukrainian NAS A.S. Iščanka were comparative in nature and showed features of certain phonetic processes in Slavic languages. The head of the Research Laboratory of the Center for Management Studies of the Phonographic forensics and criminalistics of the Ministry of Justice RB A.A. Kirdun told about the problem of defendants ‘phonetic signs identification in forensic recording. ScD., Director of the Center “Computers for the Blind” of the Institute of Informatics Problems of the National Academy of Sciences H.V. Losik  stressed the need to find new ways of incorporating the Belarusian philology with other non-linguistic disciplines. In the report, “The composition as a unit of perception of the Belarusian word” Hieorhij Vasiĺjevič presented his own view on the principle of syllable division. It lies in the fact that the composition is a kind of psychological unit individual for each person. A lively interest of the audience aroused the report of the candidate of technical sciences of the United Institute of Informatics Problems of NAS of Belarus Ju.S. Hiecevič “Automatic text, prosodic and phonetic word processing in speech synthesizer.” Juryj Stanislavavič told in detail about the work principles of the synthesizer, which consists of two parts: the first provides a variety of text conversion, the second – immediately generates it. Examples of machine sound implementation of prose and poetic texts were given at the end of the performance. 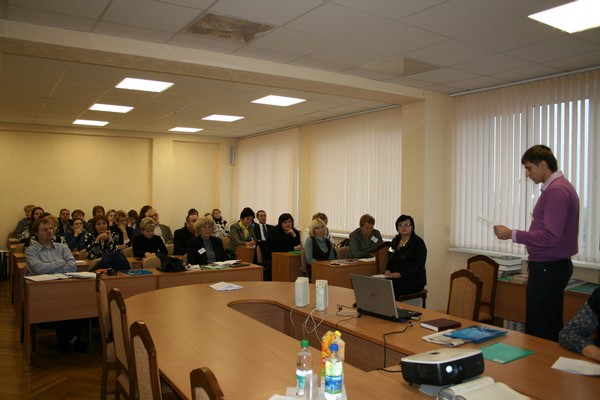 The report of Iščanka A.S. 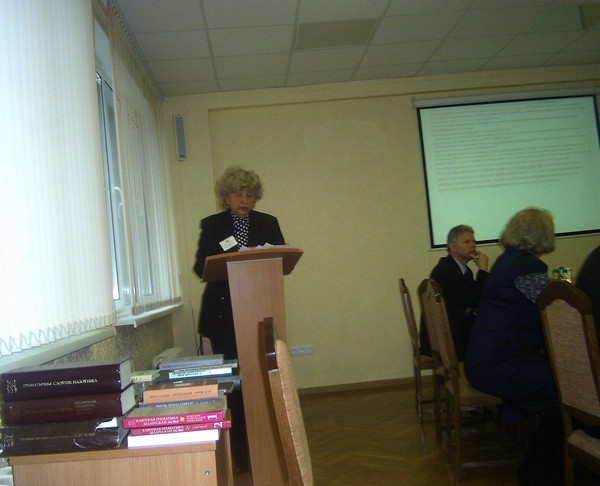 The report of Kalnyń L.E. 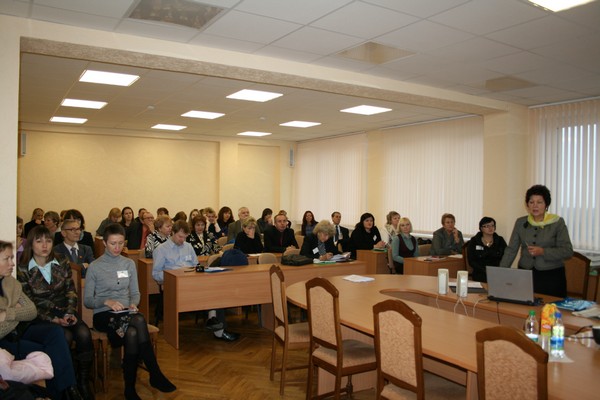 The report of Jeŭčyk N.S.

In a warm and friendly atmosphere of a round table dedicated to the memory of the leading linguists of the Institute, everyone remembered those who we proudly call the founders of the Belarusian phonetic school. Followers of scientists gratefully recalled their teachers and colleagues, showed pictures and scientific publications, noted the contribution of each of these iconic individuals to domestic linguistics. In the speech, “Life devoted to science” V. P. Rusak generalized creative achievements of academicians M.V. Biryla and A.I. Padlužny, doctors of science  V.M. Čekman and L.C.  Vyhonnaja whose names figured in the history of Russian science and the Y. Kolas Institute of Linguistics of NAS. “They belong to the great galaxy of talented scientists and unforgettable colorful personalities, the bitterness of their loss which goes along with a sense of gratitude for the fate that we were lucky enough to work with them. The rich and multifaceted creativity, productive work in the field of domestic linguistics, an invaluable contribution to the education of the followers are highly valued by actual Belarusian linguists. We are grateful for that they were and they are in Slavic philology, “-  Valiancina Paŭlaŭna said. Not only professional, but also the best human qualities of colleagues, friends and teachers recalled V.H. Kačan, L.A. Lichadzijeŭskaja, R.M. Maĺko, H.F. Vieštart, L.A. Mieĺnikava, P.V. Sadoŭski, A.M. Bulyka. The meeting was not limited to the reading of the reports: participants shared their memories, discussed some of the issues raised by the speakers, talked about the prospects of further development of the scientific advances made by the famous linguists. For example, a student of A.I. Padlužny, P.V. Sadoŭski told of the working years in the laboratory of experimental phonetics. He shared his memories about his colleagues – A.M. Andrejev, L.C. Vyhonnaja, V.M. Čekman and others. The scientist also emphasized the importance and scientific value, which are not lost, and today, the book of A.I. Padlužny and V.M. Čekman “The Sounds of the Belarusian language” is still requested. The participant touched on one of the most pressing issues of language – the problem of transferring the European average sound [l] in Belarusian. 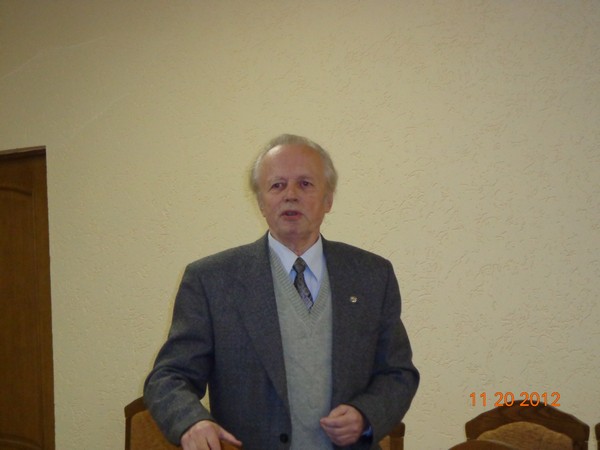 The speech of Bulyka A.M. 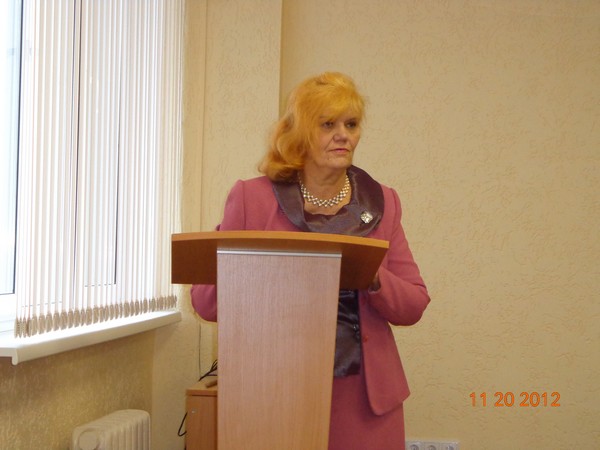 The speech of Vieštart H. F. 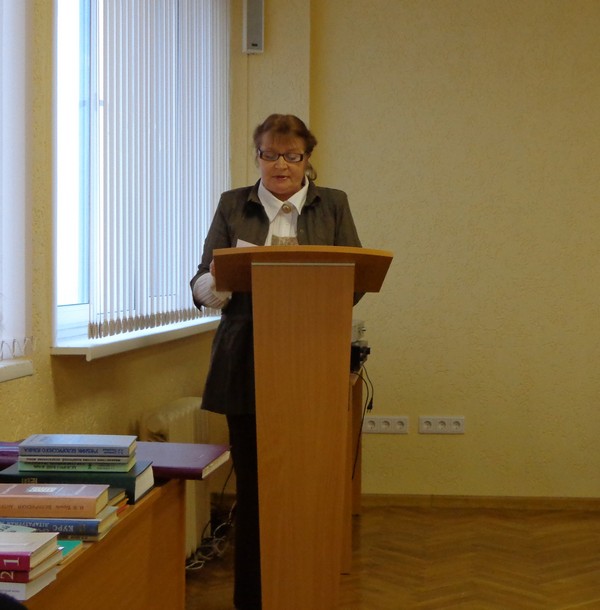 The speech of Lichadzijeŭskaja L. A. 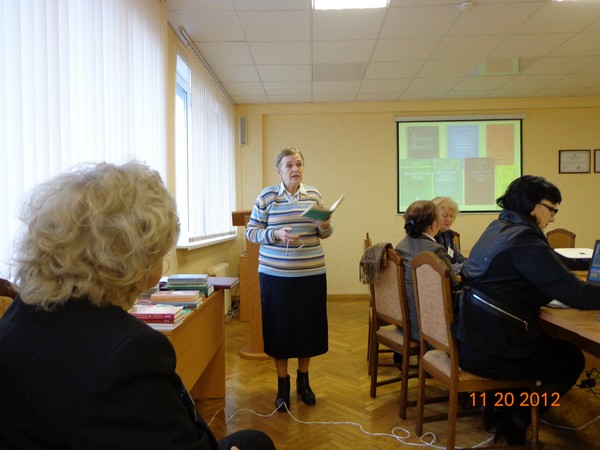 The speech of Maĺko R.M. 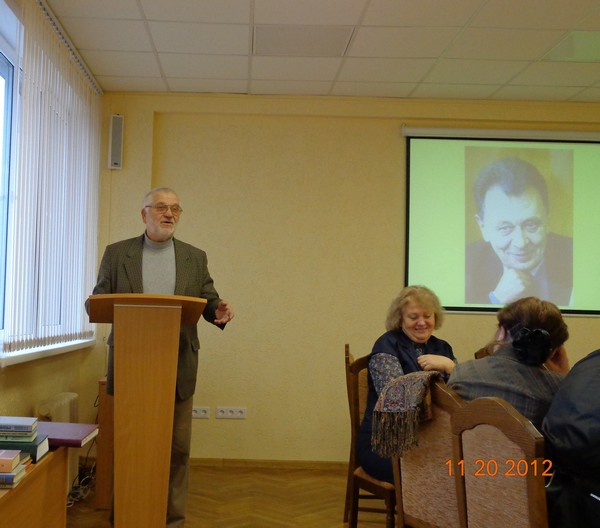 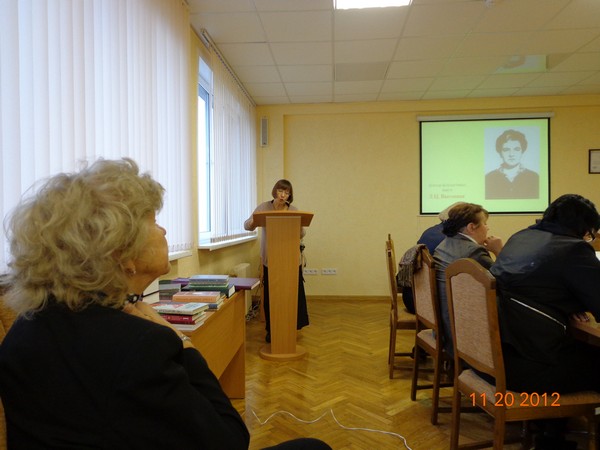 Some aspects of the phonetic  science (phonetic speech program, phonetics and language dialectology, the formation of phonetic-orthoepic skills) the speakers examined in detail during sections. There, not only purely linguistic reports, but also performances at the intersection of disciplines were introduced. For example, very useful for phonetists statement on selecting a recording device for experimental-phonetic research, was described by  junior researcher of  research laboratory of Management phonographic researches of the Center of judicial examinations and criminalistics of the Ministry of Justice of Republic of Belarus A.H. Kalašnikava. In the speech, “phonetic fund of Belarusian speech in capital” the researcher from the Institute N.P. Jeŭsijevič  presented the results of extensive research done in the Department of contemporary Belarusian language. Nadzieja Paŭlaŭna stressed that the idea of ​​creating a fund of phonetic Belarusian literary language belonged  to L.C. Vyhonnaja, and that work is the only  part of the planned project. After a long break it has become the first work of its kind, a kind of testing, which showed that such speech studies of modern Belarusian literary language research can be and should be realized. 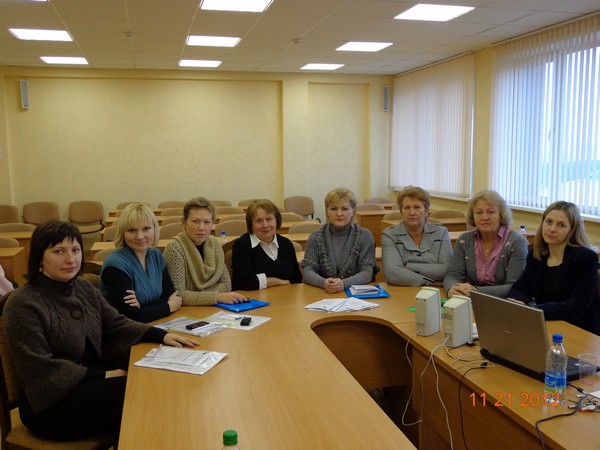 The work on a section

University professors, schoolteachers and postgraduate students actively participated in the conference. Their reports were heard in the section “Creating a phonetic-orthoepic skills” and focused on the theoretical and practical aspects of pronunciation norms of literary language. So, the teacher of the Belarusian language and literature of Minsk secondary school № 140 S.A. Kurbanava told about the features of a phonetic school course of Belarusian; an assistant professor of Belarusian and Russian linguistics from the faculty of primary education BSPU named after Maxim Tank V.I. Svirydzienka  drew attention to the formation of the phonetic-orthoepic skills of primary school pupils in Russian-language schools; an assistant professor of modern Belarusian language in BSU T.L. Čachoŭskaja settled on actual problems of teaching Belarusian phonetics to English listeners. Ph.D. candidates K.M. Dubickaja, I.A. Lapickaja, U.V. Liankievič had also Interesting performances. As you know, accentuation and  syntagmatic relations took an important place in phonetics. Therefore particularly relevant reports were presented by associate professor of publishing technologies BSTU U.I. Kulikovič and associate professor of modern Belarusian language BSU H.K. Čachoŭski.

Summarizing the results of the event, the organizers mentioned that the conference contributed to the consolidation of modern linguistic and technical knowledge, allowed to show the objective state of the Belarusian phonetic science at the present stage. Of course, it will become an impulse for further scientific research, phonetic-orthoepic studies that are possible due to that steady and reliable base, which was laid by our renowned linguists.